Today Horizon DataSys announced a rebranding of the world’s leading restore on reboot software Drive Vaccine to Reboot Restore Rx Professional, positioning the program as the next logical step up from the freeware Reboot Restore Rx. 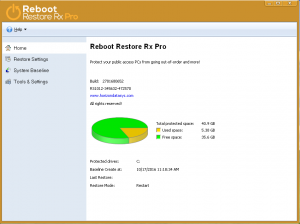 However, due to feedback from our end users who reported confusion when looking to upgrade from Reboot Restore Rx and not understanding the best upgrade path, Horizon DataSys has deemed the rebrand necessary.

“Software choice should not be complicated, and when using a freeware program it should make absolute sense from the end user’s perspective of what to upgrade to without having to spend potentially hours doing research,” said Lyle Patel, CEO and President of Horizon DataSys. “We’ve got RollBack Rx Home Edition, and it makes immediate sense to our customers who want to upgrade to go for RollBack Rx Professional. We’re simply continuing with this trend, putting Drive Vaccine to rest, and going forward from now on with Reboot Restore Rx Professional.”

The code itself will be no different from Drive Vaccine, so users familiar with the program will find no differences when transitioning to the latest version, which includes the rebrand.

However, along with a rebrand also comes a facelift for the GUI itself.

“Frankly, it’s overdue,” Patel said. “Drive Vaccine looks like a bit of a ‘90s kid. With our new, redesigned interface we bring ourselves to the modern age of technology.”